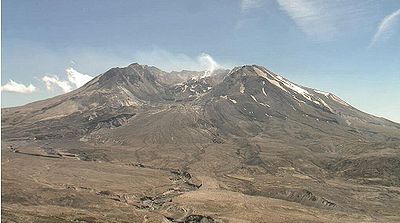 Today marks the 32nd anniversary of Mount St. Helens’ catastrophic eruption. The volcanic eruption of Mount St. Helens in Washington State on May 18, 1980, was one of the most significant geologic events to occur in North America during the 20th century. It was the first volcanic eruption in the contiguous United States since the 1915 eruption of California’s Lassen Peak. What happened at Mount St. Helens is a powerful challenge to evolutionary thinking, because the massive geologic changes caused by the volcano’s explosion were accomplished in just minutes or hours rather than hundreds or millions of years. Before Mount St. Helens blew its top, the mountain was 9,677 feet high. After the eruption, the volcano was a little more than 8,000 feet high. From one volcanic eruption, Mount St. Helens went from Washington’s 5th highest mountain to its 30th. Local wildlife was devastated, forests were flattened, and the height of nearby Spirit Lake was increased by an astounding 100 feet. The lateral blast flattened 230 square miles of surrounding landscape, and pyroclastic flows destroyed six square miles of land. The once beautiful landscape of lush conifer forest now looked as barren as the surface of the moon. Visit the following sites to learn more:

Mt. St. Helens Creation Information Center (Families, home schoolers, church groups, and other interested persons are invited to come and spend some time at the Center when visiting Western Washington State. The Center is located a few miles east of I-5, between Seattle and Portland.)