“Thank goodness I was never sent to school; it would have rubbed off some of the originality.” ~Beatrix Potter 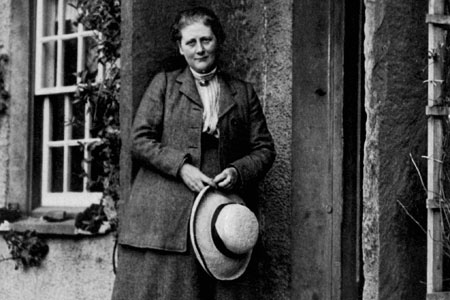 Helen Beatrix Potter was born in London, England, on July 28, 1866. She was educated at home by a governess. Young Beatrix felt that she learned more from her own self-study than from any textbook. From an early age, she was interested in fauna and flora. Potter was especially fascinated with flowers and small animals. She also developed a love of landscape as she spent holidays in Scotland and the Lake District, where she enjoyed painting the scenery and observing nature.

Miss Potter became respected throughout England in the field of mycology (fungi). However, she became world-famous for her children’s stories. The Tale of Peter Rabbit was begun as a letter to entertain a sick child, and Potter later self-published it as an illustrated book. Beatrix Potter’s charming little tales are cherished by children around the world. Her books and the characters she created are still as popular today as when they were written.

Visit the Official Website of Peter Rabbit where you can play games, print out coloring pages, and download teacher’s resources.

Did You Know…? 2012 marks the centennial of Beatrix Potter’s The Tale of Mr. Tod. First published in 1912, the tale features two very disagreeable villains, Mr. Tod the fox and Tommy Brock the badger.