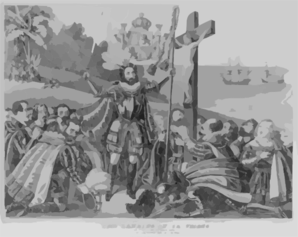 On August 3, 1492, Christopher Columbus set sail from Spain with three small ships – the Nina, the Pinta, and the Santa Maria – in an attempt to find a western ocean route to China, India, and the fabled gold and spice islands of Asia. Contrary to popular belief, educated Europeans of Columbus’ day did believe the world was round. However, they greatly underestimated the world’s size, calculating that East Asia must be located approximately where North America is.

Columbus reached land on October 12, becoming the first European to explore the Americas since the Vikings set up colonies in Greenland and Newfoundland in the 11th century. Columbus believed that the most important goal of exploration was to bring Christianity to those who didn’t know about it: “I believe in God, and He in me. He has chosen me to bring his message to the people of the East.” During his lifetime, Columbus led a total of four expeditions to the New World – discovering various Caribbean islands, the Bahamas, Cuba, Hispaniola, the Gulf of Mexico, and the South and Central American mainlands – but he never did reach the Pacific Ocean or find a western ocean route to Asia.

View The Landing of Columbus in the Library of Congress Collection:
http://www.loc.gov/pictures/resource/cph.3a43323/