Celebrate the Art of Pablo Picasso

Pablo Picasso was born on October 25, 1881. He was a Spanish painter, sculptor, printmaker, ceramicist, and stage designer who spent most of his adult life in France and became one of the most influential artists of the 20th century.

Picasso showed extraordinary artistic talent in his early years, painting in a realistic manner through his childhood and adolescence. During the first decade of the 20th century, his style changed as he experimented with different techniques.

For well over seven decades, right up until his death in 1973 at the age of 91, he created thousands of works, many of them instantly recognizable masterpieces, in a variety of media and in different styles that he himself either pioneered or perfected.

The harlequin, a comedic theatrical character usually depicted in colorful checkered patterned clothing, became a personal symbol for Picasso. Perhaps this reflected his interest in abstract geometrical shapes, for Picasso was a co-founder of the collage and Cubist styles. (Can you spot the harlequin in Picasso’s Three Musicians painting below?) 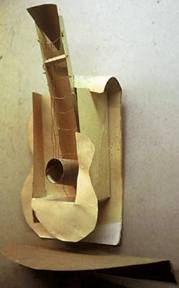 Collage is artwork made from an assemblage of bits and pieces, and it was a precursor to Cubism. Collage can be either two- or three-dimensional (see Picasso’s Guitar at right). The Cubist movement not only rejected the traditional techniques of art as the imitation of nature or real life, but emphasized the flat, two-dimensional surface of the picture plane. Cubist painters presented a new reality that depicted radically fragmented objects in which several sides could be seen simultaneously.

Besides abstraction and Cubism which he was most famous for, Picasso’s creative styles throughout his long career delved into  realism, Neoclassicism, Surrealism, and Expressionism. He also went through two distinct periods: the Blue Period (somber paintings rendered in shades of blue) and the Rose Period (a more cheery style with orange and pink colors). The Old Guitarist (1903) below left is from Picasso’s Blue Period, and The Family of Harlequins (1905) below right is from his Rose Period. “It is not enough to know an artist’s works. One must also know when he did them, why, how, in what circumstances… I attempt to leave as complete a documentation as possible for posterity. ” ~Pablo Picasso

Read about the artistic genius of Pablo Picasso and view some of his works at the Metropolitan Museum of Art.

See Also: On-line Picasso Project – The most comprehensive, authoritative resource on the life and works of Pablo Picasso.

“Every child is an artist. The problem is how to remain an artist once he grows up.” ~Pablo Picasso

Collage – Pablo Picasso created the first famous collage in 1912 when he glued a real piece of cloth onto his painting. Collage is an art form that takes objects or images of different shapes and textures, and puts them together in the same piece of art, thus creating a new whole. Have students make their own collages using found objects, fabric, newspaper clippings, pictures cut from magazines, etc.

Cubism – During his Cubist period, Picasso re-imagined objects, combined different viewpoints, and experimented with shapes and colors. Have students create their own Cubist style painting.

Color – Have students create several works of art that explore one color or shades of one color, as Picasso did during his Blue and Rose periods. What mood or feeling does their color communicate?

Self-Portrait – Shown below are two of Picasso’s self-portraits, alongside a black-and-white photograph of him. He painted one self-portrait during his Blue Period, and the other one during his Rose Period. He communicated how he felt through colors, shading, and facial expression. Have your child paint or draw a self-portrait. 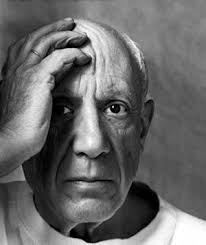 “I am always doing that which I can not do, in order that I may learn how to do it.” ~Pablo Picasso

Three Musicians Coloring Page – An art masterpiece coloring page provides children with an opportunity to interact with a piece of art in a very concentrated way.

Pablo Picasso Word Search – A free printable word search and a printable biography that can be used to enhance your child’s reading skills as well as drill facts about Picasso.

Create Your Own Picasso Head – This digital tool allows users to create their own masterpieces using famous features drawn by Picasso.