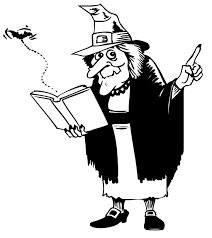 William Shakespeare’s “Macbeth” portrays the classic stereotype of old hags crouched over a cauldron muttering incantations. Shakespeare gathered together all the popular beliefs about witches’ brew from late 16th century England and concocted the following famous recipe. Although the strange ingredients do not sound very appetizing, some of them are really names of herbs. Other ingredients were given symbolic names–part of the witches’ code to keep the substances a secret.

Round about the cauldron go;
In the poisoned entrails throw.
Toad, that under cold stone
Days and nights has thirty-one
Sweltered venom sleeping got,
Boil thou first in the charmed pot.
Double, double, toil and trouble;
Fire burn and cauldron bubble.
Fillet of a fenny snake,
In the cauldron boil and bake;
Eye of newt and toe of frog,
Wool of bat, and tongue of dog,
Adder’s fork, and blindworm’s sting,
Lizard’s leg, and howlet’s wing-
For a charm of powerful trouble;
Fire burn, and cauldron bubble.
Scale of dragon, tooth of wolf,
Witch’s mummy, maw and gulf
Of the ravined salt-sea shark,
Root of hemlock digged in the dark,
Liver of blaspheming Jew,
Gall of goat, and slips of yew
Slivered in the moon’s eclipse,
Nose of Turk, and Tartar’s lips,
Finger of birth-strangled babe
Ditch-delivered by a drab,
Make the gruel thick and slab;
Add thereto a tiger’s chaudron,
For the ingredients of our cauldron.
Double, double, toil and trouble;
Fire burn, and cauldron bubble.
Cool it with a baboon’s blood,
Then the charm is firm and good.

Children and newcomers to Shakespeare may prefer to read paraphrased versions of his plays such as Tales from Shakespeare by Charles and Mary Lamb, first published in 1807. The brother and sister team selected 20 of Shakespeare’s best-known plays and set out to 1.) make them accessible to children, and 2.) pay homage to the original works. Together the Lambs distilled the powerful themes and unforgettable characterizations of Shakespeare’s plays into elegant narratives–classic tales in their own right. Their versions of the tragedies tend to rely on the language of the original plays, while the comedies are more freely adapted. But no better introduction to Shakespeare exists than these delightful adaptations–with their clear, supple, and rhythmic prose–whether encountering Shakespeare for the first time or revisiting his work. An audio version of Lambs’ Tales can be found at Librivox.