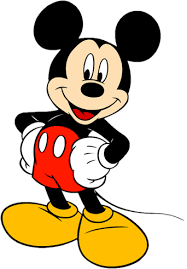 Mickey’s first appearance with sound — and the first of his films to be distributed — was in “Steamboat Willie” on November 18, 1928.

The falsetto-speaking mouse had appeared in “Plane Crazy” six months earlier alongside Minnie, but in that feature he was as quiet as a, well, mouse.

Ub Iwerks was the main animator for both shorts as well as co-director with Walt Disney, who provided the vocals for the star of the show. (He handed the voice duties over to Jimmy MacDonald in 1946 after he got too busy with his empire.)

Mickey Mouse spoke his first actual words in “The Karnival Kid” in 1929.

In 1978, Mickey became the first cartoon character to have a star on the Hollywood Walk of Fame.

As the official mascot of The Walt Disney Company, Mickey is one of the most recognizable cartoon characters in the world. Watch “Steamboat Willie” below: