It’s the Annual Day of the Ninja! 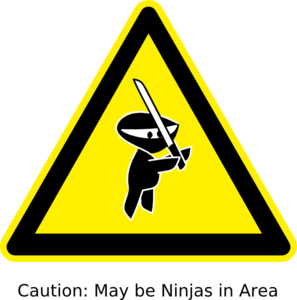 Every year, December 5th is the Day of the Ninja, celebrating the secretive world of the ninja. On this day, ninja lovers around the world are encouraged to dress up like ninja, participate in ninja-related activities, and spread ninja propaganda via the Internet.

The Day of the Ninja was created in 2003 as a response to that year’s December 5 release of The Last Samurai movie (which featured a scene where samurai battled ninja). On a larger scale, the holiday is seen as a response to the popular International Talk Like a Pirate Day, celebrated every September 19.

“There is a popular Internet meme that establishes a rivalry between pirates and ninja,” said Michael Fiegel, creator of the Day of the Ninja. “Pirates are loud, flashy, rude and crude, and ninja represent the extreme opposite. It only seems fair that they should each get their own holiday.”

Although shrouded in secrecy, ninjas date back centuries. Their origins go back to the twelfth century in feudal Japan (1185-1868), when the samurai class began to gain power. The ninja were most active during the tumultuous era between 1336 and 1600. In an atmosphere of constant war, ninja skills were essential for all sides. Ninjas were professional spies who dressed in uniforms that disguised their faces. While many popular movies, books and computer games depict ninjas wearing all black clothing and a black hood covering the entire face except for the eyes, real ninjas wore clothing that blended in with others and wouldn’t attract attention.

The two characters, “Nin” and “Ja” are the same Kanji characters as “Shinobi” and “mono.” One of the original terms was “Shinobo no mono”- literally, person of stealth. “Shinobi” activities include all manner of covert activities such as espionage, sabotage, infiltration, assassination, and planting rumors. They were also experts in the use of poison. Female ninja, called kunoichi, served as undercover agents often disguised as servants or dancers. In the West, the predominant term became ninja, probably because it was easier to pronounce.

We once asked a Japanese friend about the difference between samurai and ninjas, and he told us that samurai were recruited from the noble upper class, while ninja were considered low class, and included rejected samurai. Samurai were expected to fight properly and with decorum, but ninja didn’t have to follow any rules or formalities. They were free to accomplish a mission by whatever means necessary. Ninja were often called upon by their feudal lords to gather information, plunder the enemy’s food and weapon supplies, and lead the way in nighttime attacks.

Superhuman or supernatural power over the forces of nature was often associated with the ninja, such being able to walk on water. These perceived magical abilities were sometimes rooted in the ninjas’ efforts to disseminate their own propaganda. In other cases, control over the elements was grounded in real tactics. For example, the practice of starting fires in order to cover a ninja’s trail falls under katon-no-jutsu (“fire techniques”). The happō, an eggshell filled with blinding powder, was also used to facilitate escape.

To protect against ninja attacks, a variety of countermeasures and precautions were taken by the ruling classes. Japanese castles were designed to be difficult to navigate, with winding labyrinths leading to the inner compound, as exemplified in Himeji Castle. Nijō Castle in Kyoto is constructed with long floors resting on metal hinges specifically designed to squeak loudly when walked over. Weapons were hidden under removable floorboards or concealed in the lavatory. Rooms were constructed with traps and trip wires attached to alarm bells. Grounds were covered with gravel to provide early notice of intruders.

Actual historical accounts of the ninja and their escapades are scarce, except for what was passed down through word of mouth. This is because there were few, if any records kept of their existence. Much of what we know about ninja tactics comes from the Bansenshukai, a 17th-century book that was a compendium of the philosophy, military strategy, astrology, and weapons beliefs of the times. Ninja remained active until the beginning of the Edo period (1603-1868), which ushered in a time of political stability, internal peace, and economic growth in Japan under the tight control of a shogunate (military dictatorship).

The image of the ninja entered into popular culture in the latter half of the 18th century, when folktales and dramas about ninja were introduced in Japan. The ninja’s black “pajama” outfit most likely originated in Japanese Kabuki theater, known for its outrageous costumes. In the 20th century, ninjas become popular in the United States and other countries through the TV show, “Teenage Mutant Ninja Turtles.” Modern depictions often portray the ninja in fantastical ways for humor or entertainment.

http://minidovecomics.wordpress.com/2012/12/05/annual-day-of-the-ninja – In honor of the Annual Day of the Ninja, Mini Dove Comics brings you an eye-spy comic. Can you find all 10 ninjas?

http://www.tofugu.com/2012/11/05/a-brief-history-of-the-japanese-ninja – A Brief History of the Ninja, Japan’s First Terrorists

http://www.winjutsu.com/ninjakids/index.html – Ninja Kids! What are Ninja really all about? Find out here. Fun and info for all ages.

(Caution: there are quite a few Ninja sites on the web that aren’t suitable for kids, but the ones I’ve listed above are okay as of the day of this post.)