How to Explain Terrorism to Kids 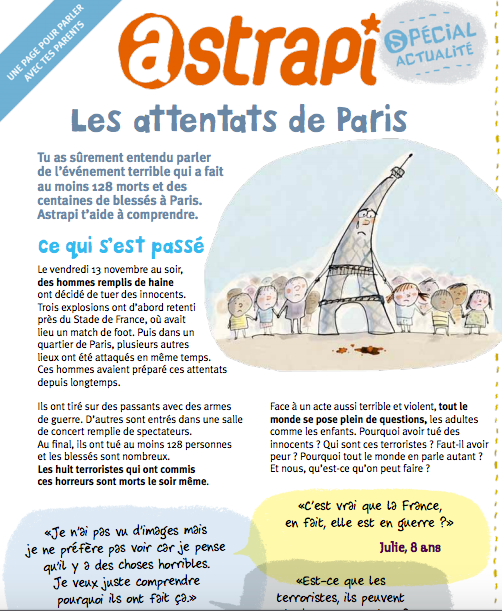 Children have been a visible part of the public mourning process following the recent terrorist attacks in Paris, bringing drawings and flowers to public spaces and lighting candles in memory of the victims. Yet knowing how to talk about terrorism can be difficult for kids and adults alike. Astrapi, a children’s magazine in France, has distributed a special news supplement aimed at 7- to 11-year-olds. The leaflet, which is available in PDF format (Parlez vous Francais?), uses poignant drawings and bite-sized pieces of information to try and explain the Paris attacks to young people. The publication addresses youngsters directly in the “tu” form which denotes closeness and familiarity.

Astrapi tackles the situation in Europe and the Middle East with digestible definitions of terrorism, radicalism and France’s role in the conflicts. It makes every effort to distinguish between radical jihadist Islamism and the majority of Muslims who practice their religion peacefully. The colorful handout includes drawings of the Eiffel Tower weeping while holding hands with children. The magazine also encourages discussion by posing questions such as: “Why were innocent people killed?,” “Who are the terrorists?” and “Should we be afraid?” The article finishes by telling young people not to be scared because that’s what the terrorists want.

An American newspaper for children also covered this tragic event. It’s called News-O-Matic, a daily newspaper for kids that’s available on iOS and Android. The articles are written in multiple text levels for young readers of all ages, and are presented in a safe, age-appropriate way. News-O-Matic even has a child psychologist on staff. Dr. Phyllis Ohr stated, “Students need to hear the truth about what’s going on in the world. Give them the details that are facts, not speculation.” You can download a free trial on The App Store, Google Play, and Kindle Fire

See also: How to Talk to Kids About Tragic Events