The July issue of Homeschooling Teen magazine is online. Read all of these articles and more at HomeschoolingTeen.com!

This homeschooling teen has his own lawn mowing business.

The University of Dallas

The Catholic University for Independent Thinkers.

It is up to the homeschool parent to introduce teens to the tools and concepts they will need to compete in the business world as an adult.

Teaching teens about money, business, and entrepreneurism is beneficial.

Most universities require students to declare a major by the end of the sophomore year, or even upon acceptance.

One of the first things to do when considering career options is to know where to start.

The World Around Us

Patriotic Degrees: 4 Ways Your Education Can Serve Your Country

Patriotic options for serving your country and earning a great income at the same time.

Why Homeschooled Students Should Play Sports at Brick and Mortar Schools

Homeschool Characters in Literature and Film

A dad is stressed and worried about losing his job and his lifestyle, but with the help of a homeschool family, realizes that his family is more important than his work.

A stealth video game about a mercenary espionage agency in the latter years of the 21st century.

Mirror’s Edge Catalyst: I Am Faith

For Faith Connors, every day is literally a leap of faith.

The Troubles: Will Brexit Take Northern Ireland Back to ‘71?

A health career is an opportunity to make a difference and change lives for the better.

Adaptive and Assistive Technology for People with Physical Disabilities

Technology is making life easier for everyone, including people with physical disabilities.

This article lists a variety of STEM scholarship opportunities for high school and college students.

The best communication apps for business!

Read all of these articles online at HomeschoolingTeen.com!

The Birth of America

People all over the United States celebrate our country’s “birthday” each year on the Fourth of July. This national holiday is called Independence Day because it commemorates the adoption of the Declaration of Independence by the Continental Congress in Philadelphia, Pennsylvania, on July 4, 1776. The declaration informed the world that the colonies, fighting against the tyranny of Great Britain, had officially proclaimed themselves to be “free and independent states.”

At the time, America consisted of thirteen colonies under the rule of England’s King George III. The colonists complained about the unfair taxes they had to pay to England. They considered it “taxation without representation,” because the colonies had no representatives in the English Parliament and therefore they had no say in anything.

The famous Boston Tea Party took place on December 16, 1773, and more tea was dumped into the harbor on March 7, 1774. Later that year, delegates from each of the thirteen colonies met in Philadelphia and formed the First Continental Congress. Although the delegates were unhappy with England, they were not yet ready to declare war.

Meanwhile, King George sent over extra troops just in case there was a rebellion. In April of 1775, British troops advanced on Concord, Massachusetts. Riders galloping on horses though the late night streets shouted, “The British are coming! The British are coming!” The battle of Concord and its “shot heard ’round the world” marked the unofficial start of the Revolution.

In May of 1775, the colonies sent delegates to a Second Continental Congress. For about a year they tried to work out their differences with England, again without formally declaring war. However, by June of 1776 their efforts had become hopeless. A committee was then formed to compose an official Declaration of Independence and to draw up war plans. They appointed George Washington as Commander-in-Chief of the Continental Army.

Thomas Jefferson was chosen to write the Declaration of Independence. After various changes, the Declaration was approved on July 2 and adopted on July 4, 1776. Of the thirteen colonies, nine voted in favor of the Declaration. Two of the colonies (Pennsylvania and South Carolina) voted against it. Delaware was undecided, and New York abstained. John Hancock, President of the Continental Congress, was the first to sign the Declaration.

Copies of the Declaration were distributed the following day. The Pennsylvania Evening Post was the first newspaper to print the Declaration on July 6, 1776. The Declaration’s first public reading was on July 8 in Philadelphia’s Independence Square, amid cheering crowds and ringing bells.

The first Fourth of July commemoration was held in 1777 while America’s Revolutionary War was still being fought. By the early 1800’s, the celebration of America’s birthday with parades, picnics, patriotic speeches, band concerts, and fireworks had become established traditions. The Fourth of July is a unique patriotic holiday. We don’t celebrate our nation’s independence on the nearest convenient Monday. We use the actual historical anniversary – no matter what day of the week it falls on – because that’s when our nation was born.

Manny and his “Dalmation Mask”

[This comes from 12-year-old Manny, one of our readers.]

“The Paradigm Challenge is one of the largest youth innovation competitions in the world. The challenge for 2016 was to come up with an idea, invention, or poster for fire safety or a way to prevent fires. They are giving away $100,000 to different age groups. Homeschoolers are welcome to participate and I figure, if they are giving away $ to kids across America… why not give it a try. The deadline for entries was May 1st. On May 11th, 100 finalists were announced and guess what…

I have been named as a Finalist in The Paradigm Challenge! More than 50,000 students participated, and my idea for reducing injuries and fatalities from home fires was selected as 1 of the top 100 entries! The Finalists are now competing to win a Public Choice award – the 10 entries with the most votes will win cash prizes ranging from $100 to $5,000. I would appreciate your help. You can see my video and vote for my entry by clicking this link: http://www.projectparadigm.org/monthly-contest#mid=25898810. It will take you less than 3 minutes to log in and vote – it’s that simple. Thank you for your support!”

[Note from Teri: A panel of judges evaluate entries based on effectiveness, feasibility, originality, presentation, and collaboration. Members of the public can vote for their favorite finalists until August 30, 2016. In addition to the prize money, Project Paradigm intends to provide further support to help turn winning ideas into saved lives. Check out the top 100 Challenge entries and vote for your favorites here. The 2016-17 challenge will be launched on July 23, 2016.]

Daddy, Dad, Da, Papa, Pop, Pa, Paw, Father…no matter what you call him, he is special! Fathers are our providers, protectors, coaches, counselors, role models, and so much more. Father’s Day is coming up on Sunday, June 19th. Homeschooling Kids Magazine has a great article featuring both traditional and creative ideas for celebrating Father’s Day: http://www.homeschoolingkidsmagazine.com/father-s-day.html

Vote for the Best Homeschool Resources & Get a FREE GIFT!

VOTE for your favorite educational resources in The Old Schoolhouse® Magazine 2016 Excellence Awards and as a BIG thank you, TOS® will give you the complete WannaBe Series – FREE!

This eBook set would normally cost $98! It’s geared to younger children who will eventually be asking, “What Do I Want to Be When I Grow Up?”

TOS® will also add you to their mailing list and begin sending you a newsletter, but you can unsubscribe at any time.

The purpose of the survey is to identify products that homeschool families have deemed most useful in their homeschools, asking parents to cast their votes in over 60 categories such as: favorite homeschool literature book, best online learning program, best app, etc.

Here is the direct link to the survey and the FREE gift for voters:

P.S. While you’re at it, please vote for HomeschoolLibrary.info or KnowledgeHouse.info as one of your favorite homeschool “secret” finds you love and wish more homeschoolers knew about! Hint, hint 🙂

Play it Safe in the Sun

Sunshine on your shoulders may make you happy, but it can also give you a sunburn. Even though sunlight is essential for all life on earth, repeated exposure to the sun is a major factor in long-term skin damage. Please visit Homeschooling Kids Magazine to learn more about keeping your skin healthy this summer: 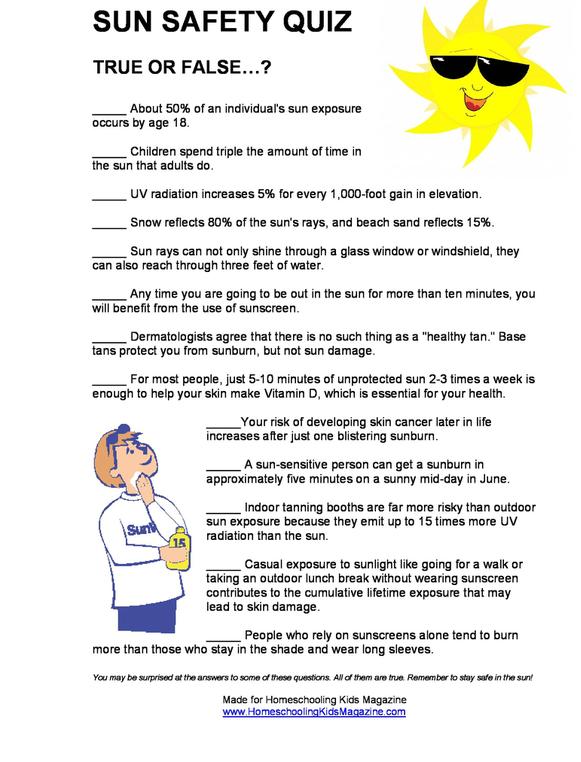 The June issue of the Knowledge House Newsletter is online!

BioKIDS: Kids’ Inquiry of Diverse Species is a website that focuses on science learning in the fourth through eighth grades. The site contains information about many common animals found in Michigan, and a few that live in other places. The field guides are a combination of tools and information to assist your expeditions in exploring biodiversity. For more information about animals, BioKIDS also links to the Animal Diversity Web, where you can find a glossary and additional educational resources. The Links for Kids are links to other useful online resources about animals and biodiversity that are geared towards kids. BioKIDS is a partnership of the University of Michigan School of Education, University of Michigan Museum of Zoology, and the Detroit Public Schools.